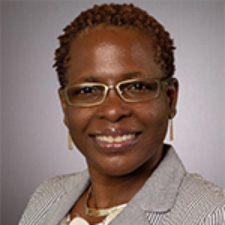 Lisa McBride, PhD serves as the inaugural Chief Diversity and Inclusion Officer and Professor of Medical Education at Texas Christian University (TCU) and University of North Texas Health Science Center (UNTHSC) School of Medicine in Fort Worth, Texas. Since her arrival, Dr. McBride has developed a Diversity Speaker Series, Diversity and Inclusion Mentoring Network program as well as a Health Disparities Certification series in partnership with Morehouse School of Medicine.

Dr. McBride, a Ferguson, Missouri, native has an extensive career and is distinguished by her commitment to diversity, equity and justice, both in education and in the wider public arena. Dr. McBride came to TCU and UNTHSC School of Medicine from Salem State University (SSU) where she served as the Vice President for Inclusive Excellence. As a member of the president’s cabinet, Dr. McBride spearheaded the campus’ 100 Men to College: Brotherhood for College Success program which was designed to increase college access, enrollment, retention, and success for low-income students and students of color—which received national attention.

Dr. McBride also served as the inaugural Chief Diversity Officer at Philadelphia College of Osteopathic Medicine (PCOM) where she developed a summer STEM+M (Science, Technology, Engineering, Mathematics plus Medicine) pipeline academy for Latino high school students, incorporated education about health care disparities and inequities in their curricula and hosted the first-ever national Transgender Medicine Symposium. For these efforts, the National Diversity Council recognized Dr. McBride as the Most Powerful and Influential Women at their annual conference. Additionally, she served as Special Assistant to the President at California University of Pennsylvania (Cal U). It was during her tenure at Cal U that she singlehandedly increased the minority graduation rate 33 percentage points to 60.5 percent through her implementation of a mentoring group for men and women of color—which gained national recognition.

Dr. McBride began her career as a police officer in her hometown. She then transitioned to a federal criminal investigator position for eight years where she worked in various countries as an undercover operative with the US Department of Justice. After receiving a Bachelor of Science and Master of Science in Criminology from Indiana State University, Dr. McBride earned a Doctor of Philosophy in Conflict Analysis and Resolution from Nova Southeastern University with a concertation in mediation and arbitration.

Dr. McBride’s guiding principle is “making a difference” and she is an unabashed public higher education advocate who proudly states, “America’s colleges and universities make a significant difference in the lives of students and their communities.”